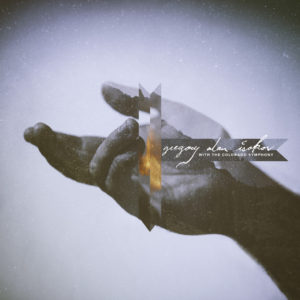 This is going to be a bit of a different review than my usual ones, essentially because there isn’t any new material on the album other than the single “Liars” which I talked about here.  Other than that the track list comprises pieces of his three studio albums from That Sea, The Gambler to The Weatherman.

This one isn’t just a challenge to write because the songs are almost exclusively rerecordings, it is also pretty much impossible for me as a writer to convey the depth of emotion that is brought out by the music on this record.  Some of Isakov’s most notable songs are here (“Amsterdam,” “Big Black Car,” and “Stable Song” to name just a few) and as an admitted slavish devotee to his catalogue, I figured there would be little room for improvement, even with the orchestra.  There is no universe in which I could have been more wrong.

Oddly enough the three songs I named above may have been the most enhanced amongst the songs featured on Gregory Alan Isakov with the Colorado Symphony.  “Amsterdam” went from a quaint folk song too a ballet, Isakov’s gentle picking on the guitar began the song but was soon overtaken by a powerful string section.  The strings stick around throughout the tune, accenting different moments until the crescendo when the orchestra’s strings and horns come together to bring the song to an emotional fervor that is not resolved until Isakov concludes his singing and the song is taken out by a gentle melody from the woodwinds.  While the original version is a powerful introspection, this orchestral masterpiece has taken on an identity all its own, and it’s one that will leave the listener breathless.

“Stable Song,” arguably Isakov’s most commercially acclaimed song, may have seen the greatest transformation from the original.  At first, the song sounds just like the studio recording, with a beautiful banjo melody and some wonderfully soft vocal harmony.  Slowly and subtly though, strings begin to build and resolve creating these tensions and releases within the music that one can feel in their shoulders.  The truly remarkable thing about this particular track is how it transforms within the confines of its six minute run time.  At moments it still feels like you are listening to a humble five piece folk band but soon after it takes the form of a John Williamsesque move score with crescendoing strings and french horns.  It gives what was once a simple ranch song an epic scale proportional to the Rocky Mountains beneath which, “Stable Song” was no doubt written.

Each song on this album is a complicated mixture of old emotions that Isakov brought with his original recordings as well as new feelings that are somehow dredged up with the orchestral accompaniment.  Isakov’s songs were always direct lines to the sentimental centers of the listener, somehow though, the Colorado Symphony’s presence only drives the music deeper.

Really, this album boils down to one simple conclusion, the experience of listening is an intense one.  This album does not strike me as background music, I can’t sit here and dictate how any one person experiences music but based on my own time with the record I just don’t see how it can command anything but the listener’s undivided attention.  Regardless of how you listen, I just hope that you enjoy a project that has passion exploding out of every moment.  I can’t remember ever being struck by an album quite like I was with Gregory Alan Isakov with the Colorado Symphony, I hope that you find it equally inspiring and enjoyable.

The album can be found on the singer’s website here or on iTunes.  I can’t recommend it enough, it really is an experience.  For added motivation here is a video of “Amsterdam” live with the Colorado Symphony. Enjoy.