Make no mistake, Sunday’s 3-1 home loss to Montreal was quite possibly the worst playoff game I’ve seen from our boys in blue.

Right off the bat, Hank was saving would-be goals while his team in front of him was mindlessly passing pucks unable to get into the Montreal zone. It was as if they were uninterested in winning a game, that could turn the tide against their Original-Six rivals from the Great White North. Sure, there were a couple close opportunities that the Rangers could have cashed in, but the execution wasn’t there. Rangers remained the same sloppy team they are, by giving away pucks that the Montreal Canadiens turned into quality scoring chances. But Hank stood tall, until his defense in front absolutely unraveled after letting Canadiens’ Alexander Radulov casually walk in and in the process, undress both Rangers’ defenseman Kevin Klein and bulldoze through 6’4″225-lb. forward Kevin Hayes, en route to a Sportscenter Top-10 worthy goal. It’s the same song every regular season and playoffs, the Rangers’ defense is unable to hold up their own in crucial situations. I don’t know if it’s the communication-disconnect between the defensive pairings, or if it’s head coach Alain Vigneault’s stubbornness to not pair his two best defensemen, Ryan McDonagh and Brady Skjei on the same blue line…I can guarantee that this defect will be the downfall of the Rangers’ inability to make it deep into the playoffs.

Another facet I think that may have led to the Rangers’ game 3 meltdown was AV’s decision to not play Pavel Buchnevich. I get it, he’s a rookie and doesn’t have any playoff experience. But he’s your best bet to jump-start your squad. Apart from a possible Canadiens’ commanding 3-1 series lead, what’d you have to lose? He has amazing skating ability and he’s one of the deadliest snipers on the team. If he’s the key to the Rangers’ playoff success, then play him.

I’ll be at Buffalo Wild Wings watching Game  3 at 4pm PST. And I have a hunch that the Rangers will break out of their struggles of playing at home and pull out a gritty win, and tying up the series, with a score of 4-2.

Never in my heart of hearts, would I be typing up this blog today and saying that the Chicago Blackhawks are about to make an unprecedented first-round exit, vs. the Nashville Predators. Down 3 games to none, one has to wonder how in the world are the Blackhawks will overcome this deficit? I had Chicago making it all the way to the Stanley Cup Finals in my bracket, and now it’s about to get absolutely shattered. Stud players like Jonathan Toews, Artemi Panarin, and Duncan Keith were a shell of themselves last night, and they had no choice to put the reins in Patrick Kane’s gloves to tie the game and send it into OT…which he did. Already down 2 games to none vs. the Preds, the Blackhawks weren’t about to go 3 games to none against their division rivals…flash-forward to today and they’re in the blackest of holes.

There’s no way to sugar-coat this, the supporting cast of the Blackhawks have got to contribute for the team to make the series a real ball game. Right now, Chicago is in a 3-0 series hole and is looking down a loaded shotgun-barrel. As impossible as it was for the Americans to beat the Soviets in the 1980 Winter Olympics in Lake Placid, they managed to beat them. I expect the same thing to happen for the Blackhawks…Chicago wins the series in 7.

Sidenote: How about Columbus Blue Jacket’s rookie, Zach Werenski taking a missile of a puck to the face and still almost finishing the game? 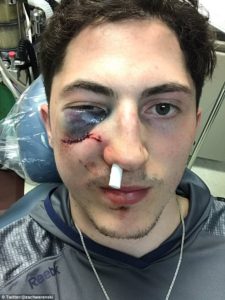 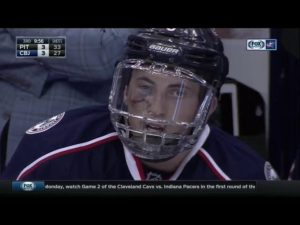 I highly doubt LeBron would be coming back to the game if that were to happen to him.

Whoaaaaaa This Video Is Awesome