Home
Concert News
Leon Bridges: A Once In A Generation Talent
Tweet Pin It 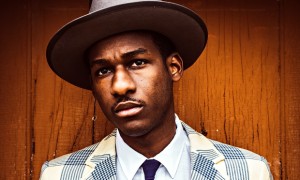 Readers of this blog know that I am a pretty huge fan of Mr. Leon Bridges, but my fandom has risen to a new level since I saw his show in Philadelphia last weekend.  My brother and I drove down from New York to the Philadelphia Fillmore to be amongst the other 2,500 fans trying to watch the soul man live.  While I knew we were in for a great show, I could never expect just how good of a performance it would be.  What the sold out crowd in the concert hall in North Philly saw was something special, it was a once in a generation type of talent.

Before the full crowd shuffled in to the standing room only hall floor, my brother and I rushed to the front making sure there would be no bodies between us and the stage.  As people filed in behind us, Son Little took the stage as the opening act.  It is tough to define their sound, it has strong delta blues influence with an unmistakable contemporary feel.  It was like Frank Ocean met Muddy Waters.  It was a great set and worth the drive down all on its own.  But we came to town for one purpose and once Son Little’s band cleared their gear off the stage we were only twenty minutes away.  The lights went dark and what happened next was simply incredible.

The band walked out first, playing a few riffs and warming up the crowd, then he danced on to the stage and the next hour and a half flew by in what felt like seconds.  The group opened with the high energy track “Smooth Sailing.”  Leon was a force on stage, with his old fashioned suit, dance moves, and vocal style it felt like we were taken back to the early sixties.  The crowd went crazy for it, with people all over dancing and singing along, it was a great group experience and one I will not soon forget.

Leon played every song on his debut record along with some covers and even a new song written on the road.  His Texas roots stuck out as the band played a unique blend of soul and rockabilly to produce a sound absolutely no one else in the music business is making these days.

Towards the end of his set, they broke into the album’s number one single “Coming Home,” and the crowd went absolutely insane.  Ever the showman, between fits of dancing across the front of the stage, Bridges gave us the honors and had us sing the entire last verse to his song.  And to our credit, we kind of nailed it.  Every word and vocal phrasing was accounted for and we could see the enthusiasm on the band’s face as they watched a group of 2,500 people copy their music perfectly.

We went through the whole show and everyone knew we were missing something.  Once people started realizing we were coming to the end cries began to echo through the crowd, “we want you to take us to the river,” “come on man take me to the river!”  After the quickest break ever the group returned to the stage to the crowd’s delight to play their encore.  Three songs later, the band left and the spotlight fell on Bridges, standing alone strumming a hollow body electric guitar.  We all knew what was coming and without any communication, we all fell silent.  Nobody sung along no one wanted to hear anything but him, as we sat and listened with amazement while Leon, Brittni Jessie, and their organ player played a haunting version of their new gospel classic “River.”  It was the perfect close to what can only be described as a perfect show.

I’ve seen a lot of concerts and I’ve really enjoyed most of them but this show was different.  The electricity in the crowd and the energetic talent of the performers put this one apart from any other I’ve ever seen.  It’s rarely easy to declare something the absolute best or your favorite, but I can confidently say that this concert is easily one of the best I’ve ever seen.  I love the music of Leon Bridges and hearing it live and in person gave it a whole new dimension.  If anyone is considering buying tickets to one of his shows, I highly recommend you do so as soon as he’s in town.

For an added bonus here he is playing “River” live it is a next level type of performance.

Austin Mahone and Pia Mia To Perform In Australia

The Wild Feathers Are Back On Tour