Home
Festival
The Hackensaw Boys: What’s Right and Wrong with the Music Business
Tweet Pin It 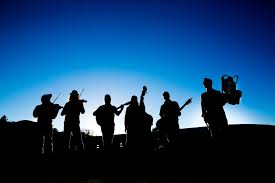 It was just after 12:30 AM in Nashville’s historic Station Inn when the Hackensaw Boys took the stage.  With a set mostly consisting of songs off of there upcoming album, the energy in the room was enthusiastic and welcoming to the five part string band from Charlottesville, VA.  The highlight of the evening came at the very end, as the boys unplugged their instruments, stepped off the stage into the cluttered crowd of people, chairs, and tables that filled the inn’s floor and played a beautiful ballad off of their 2005 recored Love What You Do, called “Alabama Shamrock.”  A perfect choice for a group that was closing down the evening at The Station Inn.  It is a love song written for America by a band that has done its fair share of traveling, seeing beauty in barrooms and in nature.

After their set I was lucky enough to sit down with singer/songwriter and guitarist, David Sickmen.  An enthusiastic and gracious man, Sickmen greeted every fan after the show with the same genuine appreciation that they gave to him.  Right away it was clear that this group loves their fans.  After talking to fans hailing from Georgia to France, Sickmen and I finally got a chance to delve into a little bit about his past both personally and with the band.

Coming from a musical family, Sickmen grew up surrounded by music.  With his father paving the way for him, it was clear at an early age that he would find himself writing and playing songs.  His first foray into songwriting came after the death of his father.  “It shocked a song out of me,” he said, soon realizing that he had the ability to keep writing.  Songs have come to him in all conceivable manners, from his forcing himself to write, to a song coming to him in a dream, Sickmen is not beholden to one element in order to find his creativity.  After concluding his explanation of his personal process for song writing he offered aspiring songwriters a piece of advice, “Don’t force it, there are songs all around you, if you pay attention you can grab things from conversations.  If you just open up it’s around you all the time, just be honest and keep trying.  You won’t ever regret the time spent trying.”

His sentiment on the process of songwriting speaks to the passion that fuels the Hackensaw Boys.  The road has not always been an easy one, the music industry is a demanding and fickle thing, and the obstacles that confront a group can be arduous.  When asked what he felt was most difficult to overcome Sickmen responded with two simple words, “the business.”  In a musical climate in constant flux, there are rarely opportunities for prolonged success.  “With everybody coming up and everybody coming down, people are always hungry for the next thing, its like an iPhone everybody needs to have the iPhone 6.”  It is strange to hear an artist talk about himself like a commodity or a fad, but that is the state of today’s music industry.

Remarkably, the Hackensaw Boys have sustained the group, in one form or another, for over 15 years, no easy feat in such a dynamic musical world.  But, the business has taken its toll on the group like any other, band members have come and gone, and the idea of making a living out of music still weighs heavy.  Sickmen, describes it as trying to find a balance, realizing what kind of life you want to live and seeing if a career in music can provide that.  He spoke candidly about the lifestyle, “its been hard and there have been lots of ups and downs, but in the end it just needs to be about the music, we just have to show up and play.”

That is what we should look for in a musician or any artist, passion for what they create.  Americana music has benefitted from a resurgence lately, and it has been beautiful watching the creation of new and exciting folk, bluegrass, blues, and old time music.  And while this music may not all make the top 40 radio stations, the community of artists and fans is among the closest in the industry.  The Hackensaw boys are a perfect example of this community, it is a group of guys who just love going out and playing music.  They have fun on stage and fun on the floor with the fans.  With a new record on the way in their 16th year as a band, it is clear that they have found the secret to longevity and it is a simple one, they show up to play.  So to any and all who want to break into the music industry or those that are still plugging away just remember, “You won’t ever regret the time spent trying.”

The Hackensaw Boys are coming to Brooklyn, NY October 24 at THE SHOP, get tickets here.

Finally, here is their video for the beautiful closing ballad, “Alabama Shamrock.”

Amid All The Craziness In the NBA & Stanley Cup Playoffs, Coachella Takes Center Stage