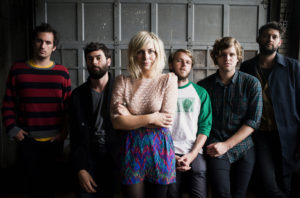 The Head and the Heart Band Photo

It has been a couple of years since The Head and the Heart dropped their sophomore album Let’s Be Still, luckily the sheer quantity of enjoyable songs from their first two records has been able to hold us over.  Well, the wait is short lived from here on out, as the group has announced their the third studio album Signs Of Light, which will officially be out September 9th, so plenty of time for the fans to get excited about the 13 tracks that will comprise it.

As is customary these days, the announcement was accompanied by a release of their first single off of Sings Of Light titled “All We Ever Knew.”  Admittedly I was not a big fan of the more uptempo (dare I say poppy) track as it was just not what I was expecting.  The song is a definite departure from where The Head and the Heart left off a few years ago but upon further listening it has definitely grown on me.  The song has bouncy piano lines and an echoey chorus reminiscent of Of Monsters and Men’s catalogue. I can’t say that I like it as much as “Another Story” or “Rivers and Roads” but I don’t think fans should begrudge bands for moving in a new direction with their sound.  Artists often evolve and experiment and I think a more experimental album from The Head and the Heart could add some interesting quality depth to their sound.  Regardless I am still very excited for the upcoming Signs Of Light.

Here is The Head and the Heart’s newest single “All We Ever Knew” enjoy:

Weezer Returns With “Do You Wanna Get High”