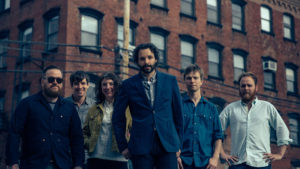 Portland, Oregon’s own Blind Pilot is back with new content!  The band has carved itself a distinct and respected position in the indie folk community with it’s blend of intricate instrumentation and serene melodic vocals.  So far the new album, And Then Like Lions is another step in a long line of beautifully harmonic pieces and will likely be accepted by fans as a great continuation of a very unique sound.  The record is officially available for pre order and, as such, the first single off the album instantly becomes available at the time of purchase.  The song in question is called “Umpqua Rushing” and sounds exactly as you’d expect.  Long flowing instrumental lines backing the same pleasant and seemingly always pitch perfect tone on Israel Nebeker’s vocals.

A link to the band’s website can be found here make sure to get out there and grab the new album.  For some added motivation, here is the group’s newest single “Umpqua Rushing.”

Signature Sounds is Pumping Out The Vinyl