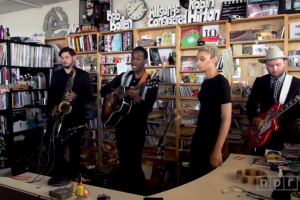 If you’ve kept up with this blog over the past few months you’ll know that I am a pretty fervent follower of NPR’s Tiny Desk series.  To the delight of many roots, americana, and indie music fans, NPR has offered a stripped down and intimate setting for our favorite artists to play some of their newest and best tunes.  2015 has been, in my opinion, one of the best years for new high quality music in decades and therefore it only seems appropriate to list off some of the highlights from the last 365 days.

What can you say about this guy other than he is an extraordinary talent.  Bridges uniquely modern take on old time soul and gospel has brought an astounding level of depth to his sound.  Also shout out to his backup singer Brittni Jessie who is a jaw dropping talent in her own right.

Oh my God these guys are incredible.  Talk about having an all time classic sound, with a James Brown style horn section, an Aretha Franklin level lead vocal, a Muddy Waters blues backing, and the kind of gospel choir backup that you would expect in a church, the Dap-Kings are kind of a perfect sound, if you’re into that sort of thing.

3.  Madison Ward And The Mama Bear

There is something endearing about a mother-son musical duo, especially when they put out music of such a high quality.  The two play some foot stompers in their Tiny Desk showcase, and look like they’re having a blast doing it.  I have to say I wasn’t a huge fan of this group until I watched this video and it completely sold me on their stuff.

Actor John C. Reilly may be well known for his roles in pictures like Gangs of New York or Step Brothers but what many may not know is he is actually a very talented singer and guitar player with an affinity for folk music.  We saw some of his singing chops in Walk Hard but I’d say his tiny desk concert is definitely a better showcase of his true musical talent.

5.  Last but not least… you guessed it Nathaniel Rateliff & The Night Sweats

Probably my favorite tiny desk concert ever.  I dedicated an entire post to it last year but it bears repeating.  These guys are putting out some of the best music in years, they’re just genuinely exciting to listen to.  Not much more I can say about them really, they’re one of my all time favorites so enjoy!

There are plenty of runners up and the whole series is worth exploring.  For some variety check out the Dublin Guitar Quartet or José González.  Really look up as many as you can they’re all great in their own way.  Here’s to another great year in 2016.

Who to Listen to This Fall