Home
News
&
Uncategorized
L.A. Is Finally Getting an NFL Team!
Tweet Pin It 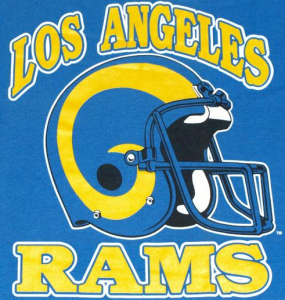 After months of conversations going back and forth between the NFL owners speculating either the San Diego Chargers, Oakland Raiders or the St. Louis Rams would make a move to L.A., news has been officially broken earlier this week that St. Louis agreed to a relocation deal with the league’s owners.

Through days of votes and re-votes, the outcome ended up with 30 out of 32 NFL owners officially allowing Stan Kroenke’s St. Louis Rams to from St. Louis to Los Angeles, specifically in the site of the old Hollywood Park racetrack in Inglewood, California, 10 miles or so from downtown Los Angeles.

Included in part of the process, the San Diego Chargers have a yearlong option to join the Rams. If San Diego declines that option, then it’s all up to the Oakland Raiders to join the Rams in Los Angeles. It wouldn’t be the first time that the Raiders would accept the option as they played in Los Angeles from 1982 to 1994, currently splitting a field with the hometown MLB team the Oakland Athletics.

For the St. Louis Rams, it would be a rather nice yet unique homecoming experience coming back to SoCal. The Rams, who were based in L.A. from 1946 to 1994 will most likely have to use the Los Angeles Coliseum until the new stadium is ready to be put in place in 2019.

This will be the second time that the city of St. Louis will have to lose another professional team, as the St. Louis Cardinals left for Arizona in 1988.

Signature Sounds is Pumping Out The Vinyl