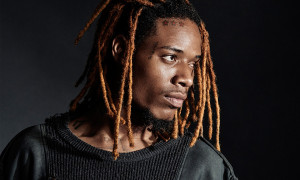 “New Jersey’s Fetty Wap stars in the latest edition of CR Men’s Book – the brainchild of former Vogue Paris editor-in-chief Carine Roitfeld. Fresh on the heels of the 2015 MTV VMAs – where Fetty beat out FKA twigs, Vance Joy and George Ezra for the Best New Artist award – the “Trap Queen” rapper features in a concise new fashion editorial, donning gear from adidas and Kanye West’s YEEZY Season 1 collection.
The spot includes several insightful quotes where Fetty Wap reveals the truth behind the Billboard-topping trap ballad, noting the track was inspired by his girlfriend who learned to cook crack so well that she made enough for them to share. Read an excerpt below and order the full publication here.” – Chris Danforth

“Everyone can have their own trap queen. There is the way I use it in the song, but my mom is a trap queen. She held us down and she was a queen at doing it. She took care of her children and her tribe, made sure we had food on the table, and kept our heads up. However you want to put it, there are different meanings to it.”

Don’t Be A Fool, Start Investing In High School